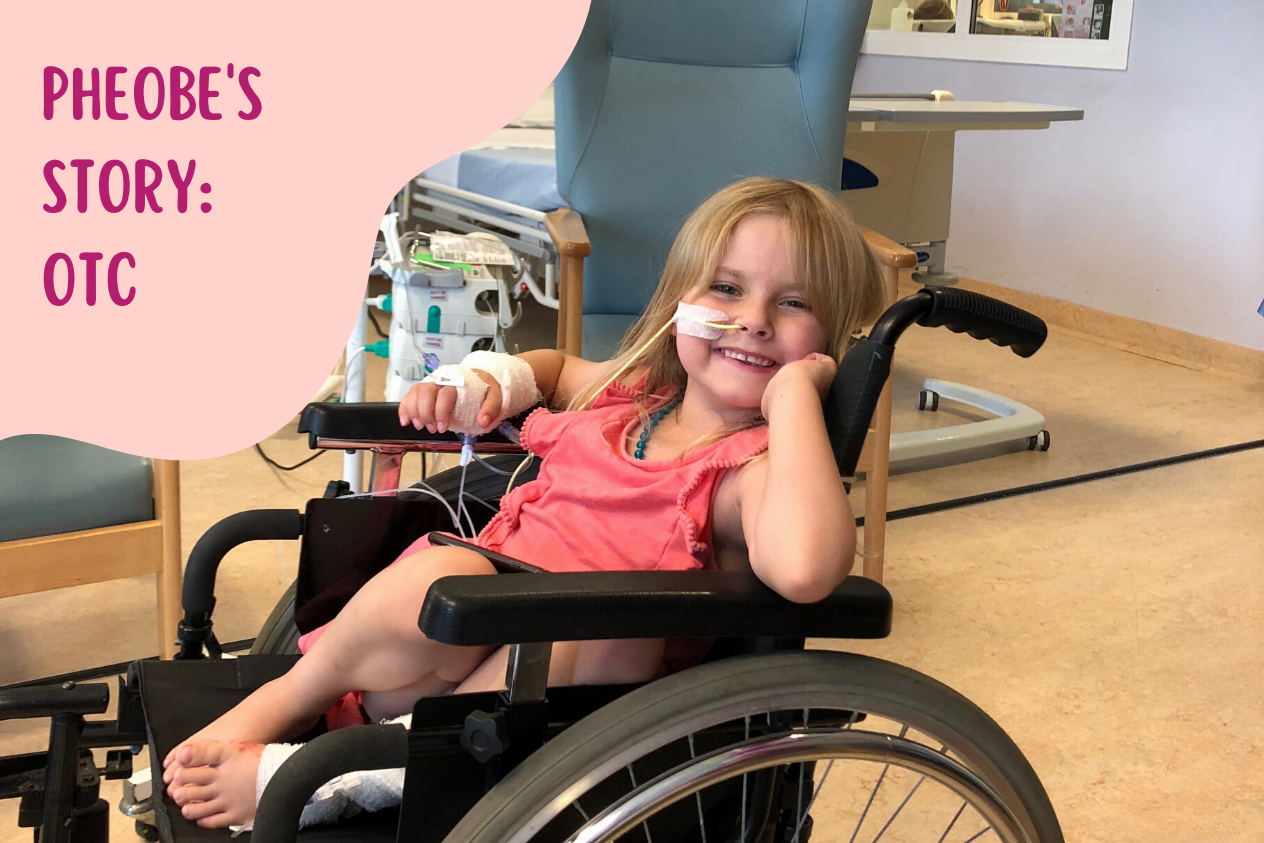 In August 2017, Phoebe was diagnosed with Ornithine Transcarbamylase Deficiency (OTC). Here, Julia, Phoebe’s Mum, shares her story and their experience of living with OTC.

“Phoebe was born healthy. Until age 4, she showed no signs of the metabolic condition, with which she would later be diagnosed.

In 2016, Phoebe started school. I had concerns that she wasn’t ready for this step. Being a July baby, she was one of the youngest and seemed somewhat emotionally and academically behind her peers. She did however have a happy start.

From March 2017, Phoebe started to develop some worrying symptoms. She had episodes of confusion, unbalanced walking, slurred speech, short periods of absence and her responses were sometimes slower. She appeared to have hallucinations and would regularly vomit for no apparent reason. Her behaviour changed; she would become agitated and lash out. She was always tired. Our daughter had changed completely from a once happy active child to one who was often distressed, tired and sick. After many visits to the doctor, she was referred to the hospital.

We were very concerned, and Phoebe’s school shared our worry. In June 2017, she fell in the school playground and was unresponsive. An ambulance was called and she was taken to hospital. She was booked in for an EEG test at the hospital, to look at brain activity. The test showed some possibility of an abnormality, but a second test came back normal. From then, we were asked to await our referral appointment.

In August 2017, we saw a paediatric consultant at our local hospital. We explained, in great detail, her symptoms. The doctor listened attentively and examined Phoebe in a way which filled me with confidence; and this was the doctor, who would find out what was wrong with my baby. She had blood tests and later that day, the doctor called to arrange further blood tests and an ultrasound on her liver, for the next day. The same evening, the consultant on duty telephoned, asking us to bring Phoebe into hospital as swiftly as possible, for her safety. Terrified, we went in.

At the hospital, the consultant explained that Phoebe had a dangerously high level of blood ammonia, which could cause damage to the brain and was a risk to her life.

They thought Phoebe had a metabolic condition and a metabolic consultant in London was advising them on her care. She was attached to wires; medication was given through IV lines; blood was taken and sent to other hospitals – it was a long and scary night. We were told that in the morning she would be going to The Evelina Children’s Hospital in London, who would hopefully give us a diagnosis.

Living with OTC means Phoebe must now follow a low protein diet; take daily medication; and we must ensure she has just enough calories and protein to keep her metabolically safe. She also needs extra care during times of illness. However, she takes everything in her stride and is happy and confident every day, despite having numerous hospital admissions and being partially tube fed. Her energy is improving and although she is behind at school, she’s progressing in the right direction and makes us proud every day.”