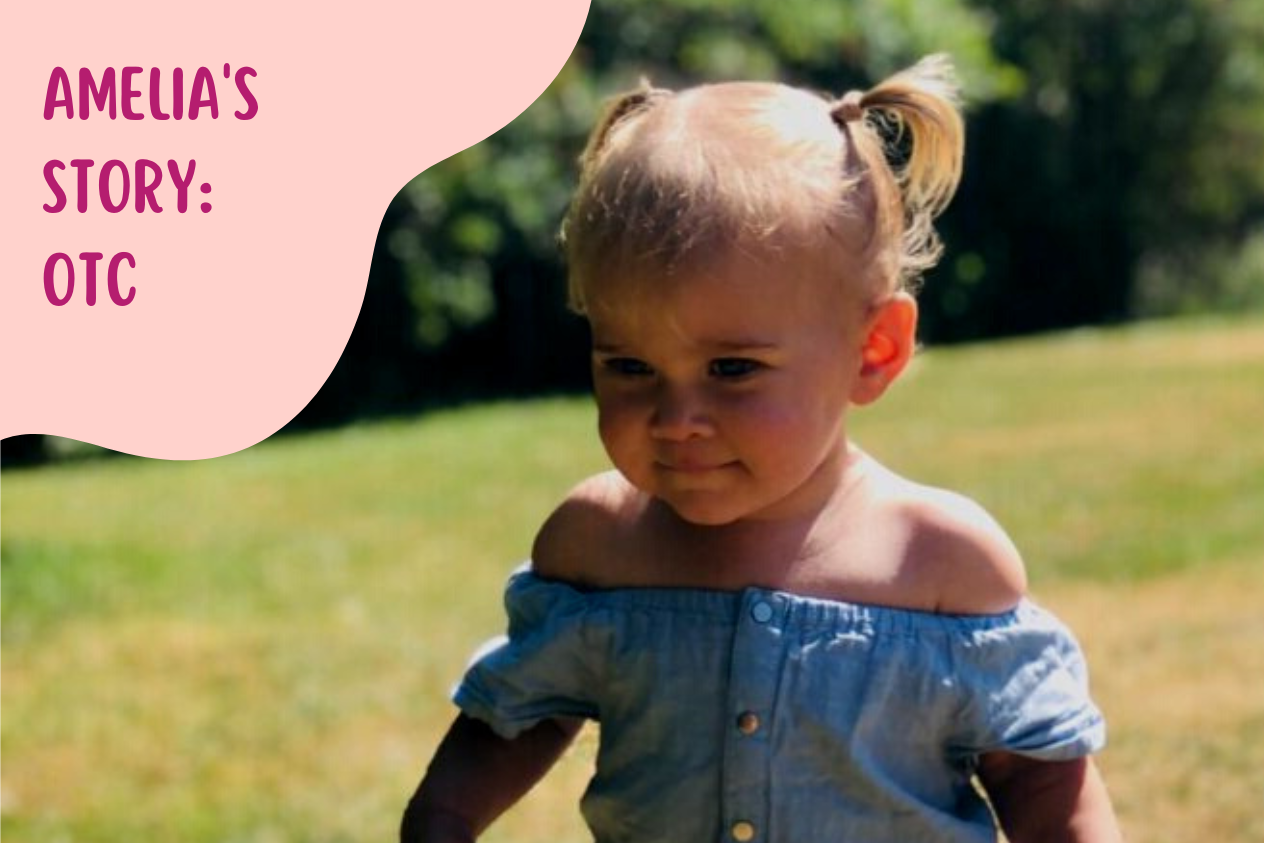 During the coronavirus pandemic, Amelia started to become poorly before eventually being diagnosed with Ornithine Transcarbamylase Deficiency also known as OTC Deficiency.

“In October 2018, we welcomed our daughter, Amelia Ivy-Rose, after a healthy and happy pregnancy. She was beautiful. The only problem that we had was that Amelia struggled to latch on but, as I was keen to pump, it was a hurdle that we quickly overcame.

At four months old, we noticed that Amelia would cry more than most babies and didn’t like being held by family members. The health visitor told us that she was “anti-social” and “clingy”. We were upset by this but hoped that she would eventually grow out of it.

Amelia met all of her milestones slightly early but I knew that something wasn’t quite right; I always wondered if she was in pain.

Amelia always ate well but, in February 2020, we noticed that Amelia was vomiting and had become very irritable. We took her to the doctors who told us that she had an ear infection but the antibiotics didn’t make her better. We then spent the next 10 weeks explaining our daughter’s symptoms (vomiting, head banging, lethargy) to three GPs, two A and E doctors, two health visitors and even the emergency dentist. No one could help us and Amelia was called a “mystery”. The blood tests that were completed showed mild dehydration but we knew that there was more to this.

In April 2020, Amelia had become so poorly that she had stopped walking. This was when her symptoms were taken more seriously and she had multiple scans and blood tests at A and E. We were admitted and, four days later, we were told that she had an Inherited Metabolic Disorder. Amelia’s ammonia levels were dangerously high and she needed to be transferred to the Evelina Children’s Hospital. Due to the coronavirus pandemic, my husband had to be told via FaceTime, which was devastating. We were unable to console each other. We had to be blue lighted to the Evelina and that ambulance journey was the worst and loneliest time of my life. I held onto Amelia, not knowing if I would ever get to take her home.

As soon as we got to the Evelina, everything went very quickly and efficiently. She was put on IV medications to lower her ammonia levels and a drip for energy and hydration. Within hours of being at the Evelina, they had got her ammonia levels to a safe level. I remember crying with relief but also knowing that the journey had just begun.

The following morning, I had a meeting with eight professionals in the metabolic field; this was scary but reassuring too. Amelia’s consultant was amazing and told me that she was confident that they were dealing with OTC Deficiency. I had never heard of this but every question that I asked was answered and I knew then that we were in safe hands. I asked the question that no parent should ever have to ask, “how long does she have?” and I will never forget being told that the condition is manageable through diet and medication. Amelia’s nurse went as far as to say that many children live happy lives with OTC Deficiency. As devastated as I was about her diagnosis, I felt lucky that Amelia had something that could be managed.

We spent just over a week at the Evelina and were taught so much to help us cope with this at home. I was quite keen to learn everything quickly but I was never rushed and they allowed my husband to FaceTime during all of the meetings to keep him involved as he couldn’t visit.

Amelia had to learn how to walk again, which thankfully only took her a few days. She is now running and keeping us on our toes. She has a strict low protein diet to follow and requires a lot of medication and supplements but she has taken this all in her stride. She doesn’t like the medicines but she takes them well.

We have had one hospital admission since her diagnosis but this was more precautionary. Amelia was not poorly this time; she just needed monitoring. I felt in control this time and knew exactly what needed to be done.

Amelia has frequent blood tests, as her diagnosis is new, and her height and weight are monitored regularly too. Although she was partially fed through a tube whilst in hospital, she hasn’t yet needed one at home.

It is too early to know if she will experience difficulties with learning but she is the happiest that she has ever been and, as parents, that is all that we could ever ask for. Amelia continues to thrive and we are so proud of her. She is the strongest person that we will ever know.”