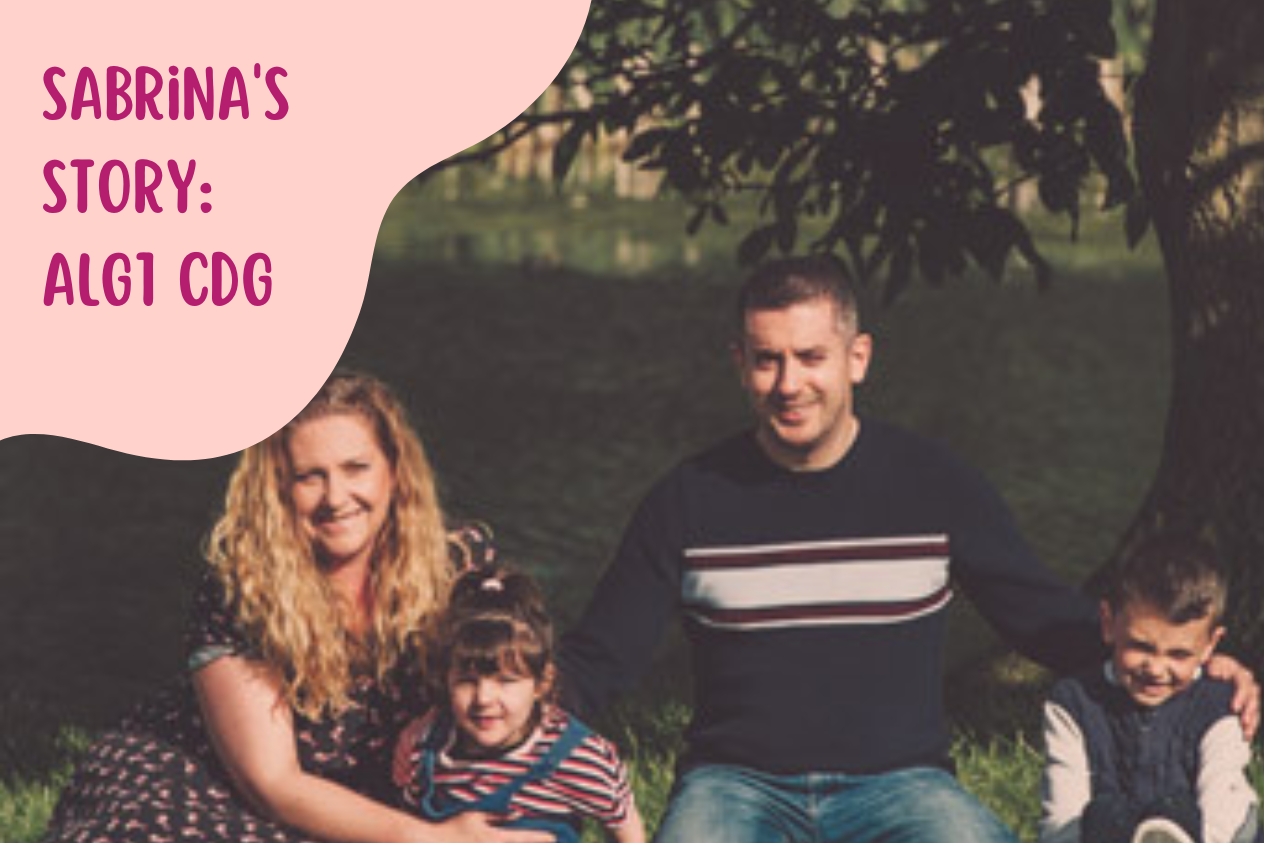 Weeks after Sabrina was born, she started to show unusual symptoms, which eventually led to a diagnosis of Epilepsy and Global Development Delay. However, Sabrina’s parents knew that there was still something more to these diagnoses. Four years later, Sabrina was diagnosed with ALG1 CDG.

“After having our son in 2012 without complications and with no health problems, we expected our second baby two years later to be the same. And at first, she was.

We had one of each and our family was complete. Sabrina slotted into family life extremely well. She fed well, slept well and she really seemed to be a content baby – or – was she a bit too quiet? She watched us all the time and never seemed interested in touching her cuddly toys or baby rattles.

At around twelve weeks, I noticed some eye flickering when putting her down. We thought it was probably her startle reflex and just kept an eye out for it. But deep down, my heart sank with a fear that only a parent would feel when your child is poorly, properly poorly. I didn’t want it to be real; I thought that if I didn’t think about it, it would go away. But it didn’t. If anything, it got worse. At her next weigh-in at the baby clinic, I mentioned my concerns to the midwifery team. And that’s when it all started: the treadmill of appointments, confused health professionals and test after test after test. I asked the nurse, ‘can’t you just take a pint of blood and use that up instead of taking bloods from her every other week?’ They laughed, but Sabrina’s and our distress were real.

When Sabrina was two and after a couple of hospital admissions and subsequent EEG’s, she was diagnosed with Epilepsy and medication was prescribed for her. Luckily, this controlled Sabrina’s seizures and has continued to do so. But I am forever scarred, remembering how hopeless I felt watching her having seizures; not able to help her or stop them. The big question remained, “what is wrong with her”?

By this time, Sabrina was given the label of Global Development Delay. Delay, there’s a word that we clung onto. This one word fed into our “denial belief system”. The belief system that tells you that perhaps there is nothing wrong and she will “catch up”. So, I googled and I researched. As I did this, I became more confused. Other children with GDD were nothing like Sabrina. They didn’t even seem to have the same symptoms. Looking back, I wish someone wouldhave explained that GDD is an umbrella term used for “we don’t know”. I clung onto that terminology as it was all we had, and I felt angry when the truth dawned on me – not just for us but for other families in the same situation – that the experts just don’t know.

The treadmill of tests continued. Every single new word of terminology or disease mentioned by a healthcare professional, I would google. Google, worry, repeat became my life as we desperately searched for an answer. Every test came back as negative/normal. How could this be? After four years of this, I was about to say enough is enough, and then the “key”. Sabrina was diagnosed at four and a half with ALG1 CDG, a rare Inherited Metabolic Disease. A multisystem disease which affects the sugar trees (glycans), affecting the production of proteins and the building blocks of cells in the body, mainly affecting her brain. And breathe

At last, we fitted in, joined groups and found support. But most importantly, the search was over. Acceptance and gaining knowledge about her disease is where we are now. It is a complicated disease, which takes time to understand and we are still learning.

When you have a diagnosis, you can answer the question that everyone wants to know the answer to: what is wrong with her? I quickly follow that with ‘and this is what is right with her’ – a list which is extensive.

Sabrina is not defined by her disabilities. Her smile is contagious and the joy that emanates from her warms your heart. She has a strong independent streak and loves adventure and exploring

She is drawn to fun and makes lots of friends even though she can’t hold a conversation. She is happy (mostly) and loves her family. We are privileged to be her parents and advocates.

Our hopes for the future are that Sabrina continues to stay well and develop, and that we can build awareness through her Sabrina’s World Facebook page (Opens in new window) of her rare disease and CDG and crucially put a spotlight on the Transferrin Isoelectric Focussing test that led us to Sabrina’s diagnosis, so that other families with an undiagnosed child can obtain their diagnosis faster than we did. This would make us very happy.”