The Congenital Disorders of Glycosylation (CDG) are a group of genetic disorders that have a broad spectrum of symptoms and range from mild to life-threatening in severity. This group is expanding at a rapid pace, and more than 60 different forms of CDG have been reported. Information about the disorders is always changing due to the developments in knowledge and new forms being reported.

The CDGs are caused by defects in one of the body’s natural processes called Glycosylation. This process uses hundreds of different enzymes to allow sugar molecules in the body to attach to certain proteins or lipids (fats). When this happens, they are given the names glycoproteins and glycolipids, respectively. Both are needed to carry out different tasks and are essential for the normal growth and function of the tissues and organs within the body. There are at least 100 steps, all using different enzymes, in the process of glycosylation. If one of the enzymes in the process does not function correctly it can cause a variety of symptoms, affecting many different parts of the body.

Previously, the CDGs were broken down into two groups known as CDG-I and CDG 2. However, more recently a new classification has been introduced and now all the CDG’s are listed with the abbreviation of the causative gene followed by “-CDG”.

The exact incidence of CDG is unknown and it is believed that many cases go undiagnosed or are misdiagnosed as having other conditions. The number of cases is thought to rise significantly in the future with increase knowledge and understanding. The most common type (PMM2-CDG) has been reported in more than 700 individuals.

The CDG’s are multisystem disorders meaning that they can affect a number of organs, systems, and areas of the body. Symptoms could include

In most cases symptoms begin in infancy. Symptoms vary from case to case and vary in severity. Severity can range from death in infancy to only mild symptoms in adulthood. Because many of the types have only been reported in a few cases, not enough is known about the symptoms that present in each specific type.

Diagnosis is based on the recognition of key symptoms, a detailed history and a clinical examination. Isoelectric Focusing (IEF) of serum transferring is the frequently used screening test. Additional tests such as Electrospray Ionisation-Mass Spectrometry (ESI-MS) are used for confirmation. Some forms of CDG may be diagnosed through enzyme assays. Final confirmation is done by molecular testing.

Treatment is symptomatic & supportive and requires a multidisciplinary team of specialists. Only three forms of CDG have specific therapies available. Patients with MPI-CDG are given oral mannose which is a life-saving treatment. Some people with SLC35C1-CDG are given fucose therapy – this can prevent recurrent infections but does not treat other symptoms seen in this form. Some individuals with PIGM-CDG are given butyrate which improves the PIGM gene action and so can assist in managing the seizures associated with this form.

Supportive therapies include speech and language therapy, physiotherapy and occupational therapy. Dietary supplements are often given to help the child grow and gain weight. Antacids and thickening agents are treatments of reflux. Tube feeding may be recommended to assist with feeding with a tube that is either passed through the stomach wall (gastrostomy) or through the nose into the stomach (naso-gastric tube feeding).Any dietary changes should only be implemented upon the recommendation and consultation of a specialist dietitian.

An ophthalmologist may give eye patches or glasses to help vision and in some cases may recommend eye surgery to correct strabismus, if present. Seizures may occur and are treated with anticonvulsants; in rare cases patients may have seizures that do not respond to this treatment. Surgery may be required to treat some skeletal malformations that cause problems. Later in life, skeletal problems may require some mobility aids and orthopaedic management. Bleeding problems do not often cause major problems but special care and attention should be drawn to it if surgery is required; in these circumstances fresh frozen plasma is used. Organs such as liver and heart will be regularly checked. In some CDG, certain medication(s) should be avoided; ask the advice of your specialist. It is important to attend follow-up appointments and attend check-ups with various specialists. 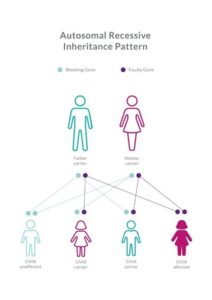 Humans have chromosomes composed of DNA. Genes are pieces of DNA that carry the genetic instruction. Each chromosome may have several thousand genes.

The word mutation means a change or error in the genetic instruction. We inherit particular chromosomes from the egg of the mother and sperm of the father. The genes on those chromosomes carry the instruction that determines characteristics, which are a combination of the parents.

This is an inherited condition. There is nothing that could have been done to prevent your baby from having this condition.

We all carry two copies of each gene. Most of the Congenital Disorders of Glycosylation are transmitted by an autosomal recessive mode of inheritance. A person who has one normal gene and one gene for the disease is termed a carrier for the disease and does not show any symptoms. The condition arises when an infant inherits a gene for the disease from both parents. The risk to the offspring of a couple who are both carriers is 25%. There is also a 25% chance that the child will not carry the abnormal gene. The risk of an unaffected sibling being a carrier is 2/3. Carriers do not show any symptoms (asymptomatic). In one form of CDG, known as PMM2-CDG (CDG-Ia), the risk of having a second child with the condition raises from 1:4 to 1:3. Some forms of CDG are inherited as an autosomal dominant condition (EXT1/EXT2-CDG) or an X-linked recessive condition (MAGT1-CDG and ALG13-CDG). These are general descriptions of inheritance. For further information a genetic counselling service should be consulted.