Acatalasemia is caused by mutations (changes) in the CAT gene. This gene is responsible for giving instructions for making the enzyme catalase which breaks down hydrogen peroxide molecules into oxygen and water. Hydrogen peroxide is formed through chemical reactions within the cells. At low levels, it is used in chemical signalling pathways however, at high levels it is toxic to the cells. If hydrogen peroxide is not broken down by the enzyme catalase, it will be converted into compounds called reactive oxygen species that can damage DNA, proteins and cell membranes.

Mutations (changes) in the CAT gene greatly decreases the activity of the enzyme catalase. A lack of this enzyme can cause hydrogen peroxide to build up to toxic levels in certain cells. An example is a build-up of hydrogen peroxide produced by bacteria in the mouth can build up and damage soft tissues causing mouth ulcers and gangrene (a serious condition where a loss of blood supply causes body tissue to die). The build up of hydrogen peroxide also causes damage to beta cells of the pancreas which release insulin that controls blood sugar levels. This is why individuals with Acatalasemia are at risk to type 2 diabetes.

It is common for people to have reduced catalase activity with no identified mutation in the CAT gene. The cause of the condition in these cases is unknown.

Many individuals with this condition show no symptoms and never have any related health problems. The only reason they are diagnosed is because they have affected family members.

Some of the first patients that were reported with Acatalasemia had:

The condition is known as Takahara disease when Acatalasemia occurs with mouth ulcers and gangrene. This is rarely seen in more recent cases, most likely due to improved oral hygiene.

Individuals with Acatalasemia also have an increased risk of developing type 2 diabetes.

A diagnosis usually starts with a full medical history, investigation of symptoms and a physical examination. Molecular genetic testing can confirm the diagnosis by showing mutations (changes) in the CAT gene.

There is currently no cure for Acatalasemia. With the main symptoms being related to oral ulcers and gangrene, periodontal (gum disease) treatments are used to reduce tissue damage and improve oral hygiene.

Acatalasemia is an inherited condition. Humans have chromosomes made up of DNA. Genes are pieces of DNA that carry the genetic information. Each chromosome may have several thousand genes. We inherit chromosomes from the egg of the mother and sperm of the father. The genes on those chromosomes carry the instructions that determine a person’s characteristics, which are a combination of the parents.

The pattern of inheritance of Acatalasemia is autosomal recessive. This means that carriers of the condition do not have the disorder because the other gene of this pair is working normally. Parents of children with Acatalasemia are carriers.

When both parents are carriers, the risk to the baby in each pregnancy is

Genetic counselling can be requested to get a full explanation. 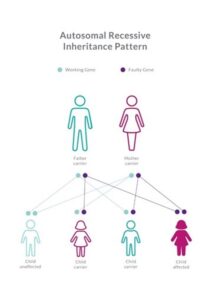 References are available on request. Please contact us by phoning 0845 241 2173 or emailing contact@metabolicsupportuk.org [Resource Library No: APX009].